Virtual reality headsets: everything you need to know 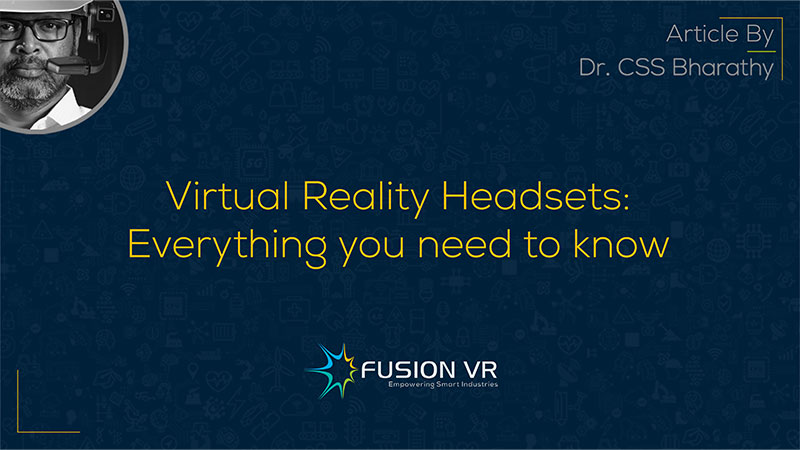 If you’re a gaming enthusiast and one who is interested in virtual reality games, you would be a keen observer of the new VR headsets, and this may definitely interest you. While VR reminds most people of the VR gaming experience, this fantastic technology is actually used in several areas of human activity. Apart from recreational use, it is also extensively used for educational purposes and in various industries. You would also be surprised that it’s used in the healthcare industry as well.

The technology has matured, and the cost of headsets has decreased to the extent that their adoption has also increased. With so many folks using VR, we believe that there are more people than just gamers who would be interested in what I have to say. VR technology can be experienced in many ways. The choice of hardware depends on the kind of content the user wants to experience and the level of user interaction that is desired.

Fusion VR is deeply engaged in providing solutions for the manufacturing industry and believes in taking today’s enterprise into the metaverse. For all these reasons and more, we need to share the latest and the best in the world of VR headsets with everyone who follows our blog.

Though there are various different models with various sensors and electronic components, there are a few things that are common across all these devices, and these are the parts that provide the essential functions of any basic entry-level VR headset. In order to make a more informed decision, you should be familiar with how a typical VR device works. Understanding its parts and functions will help you understand the various categories of VR devices.

Any VR headset, as you know well, covers the eyes and cuts the user from his or her immediate reality and surrounding environment. The user is immersed in the virtual world that allows navigation with six degrees of freedom. This immersiveness tricks the human brain into thinking that they are in a new world and believing they are “actually” doing stuff.

Ask any gamer why they love VR games, and they’ll attest to how incredible that experience is. This is not the typical experience with game consoles, but it’s a much more incredible experience. This is also unmistakably the result of the high-tech headsets that companies like Meta, HTC, Sony and others have ushered into the market.

So what makes a great virtual reality headset? The best headsets are truly comfortable to wear and use, have motion tracking capabilities, fantastic high-resolution displays, highly realistic graphics, a wider field of view and, most importantly, don’t cause motion sickness. This great headset is the result of not just cutting-edge technology but also the product of an innate understanding of how humans perceive and experience the world around them. Understanding the human experience is critical to the success of VR headset designs. Virtual reality headsets are far better these days than the day the technology started emerging into the scene.

There’s a wide range of “headsets” to deliver a VR experience which begins from the Google cardboard at the lower end to the mid-range ones from Samsung and high-end headsets such as the Meta Quest Pro.

Google Cardboard is the simplest way to get a basic VR experience. As it is called, this is a foldable cardboard viewer when coupled with a smartphone to become a VR device. This is a cool way to introduce kids to VR and get them interested in the world of virtual reality.

Moving on from the simple stuff, let’s look at some of the best headsets that have been reviewed by industry and media experts. First up is the Meta Quest 2 (formerly Oculus Quest 2). This is an affordable one and a standalone headset as well.

By that, I mean that it’s not connected to wires and has sufficient processing power for entry-level experiences. This allows greater freedom of movement, but cannot walk around as your normal vision is blocked.

That being said, the Quest 2 can also be tethered or connected to a computer, making it a VR headset for PC that will deliver more powerful and complex experiences. The Quest 2 has excellent motion tracking capabilities and great controllers but suffers from short battery life. This is a good headset for entry-level VR enthusiasts and for companies that utilize VR for training, marketing and corporate experience applications.

Another great headset is the HTC Vive 2, which has excellent motion capture and high-resolution viewing capabilities. It’s also a bit expensive and may not come packed with the required controllers/accessories etc. But it’s considered one of the best for gaming enthusiasts. Not far behind is the HP Reverb G2, which also provides high resolution with a comfortable headset and controllers.

The most recent high-end VR headset, called Meta Quest Pro, was released a few weeks ago. This is more of a mixed reality headset than a VR headset as it comes with peripheral vision capabilities allowing you to see the room around you. It also comes with eye tracking that delivers a better user experience, reducing eye strain and also capable of delivering actionable insight based on user eye movements.

More development is ongoing in the world of VR headsets. The one that is being closely watched is Apple’s release of its own VR headset, which is expected to appear in the market sometime in March 2023. It is reported that the Apple VR headset would be equipped with a 4K micro-OLED display, iris scanning, facial expression tracking, several external cameras for tracking movement etc.

This could up the competition considering Apple’s extensive fan base and technological pedigree. All this is exciting news for developers and consumers alike. This could also accelerate the growth and adoption of the metaverse. The quality and dependability that will result from the tough competition from all VR headset designers are expected to rope in industrial and commercial entities to increase their business use of VR.

The metaverse is the next big thing for everyone. Major tech companies are investing billions of dollars in developing the infrastructure, capabilities and standards necessary to make it a viable and self-sustaining reality. Commercial and individual players stand to benefit from the metaverse with the opening up of new possibilities and opportunities.

Fusion VR is engaged in this historical change and hopes that this small endeavour will be instrumental in furthering the growth of interest in VR and all extended reality technologies in the country. You are welcome to explore this more on our website and reach out to us if you have a question or just wish to have a friendly chat about a future of exciting possibilities.

What are NFTs & Virtual Reality

Virtual Reality for Well-Being: The Next Big Thing for Mental Health

VR Surgery: Virtual Reality Gets Real In the Operating Room

VR’s Role in the Marketing Strategies of Retail Shopping