Virtual Reality for Well-Being: The Next Big Thing for Mental Health 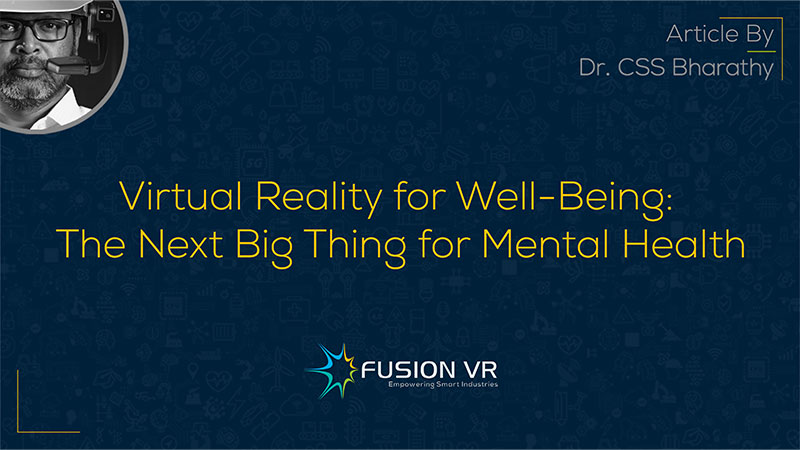 Virtual Reality has got its place in treating and helping to stabilise people’s mental health and well-being. This pandemic has been a tough time for many, which has resulted in several mental health issues. VR comes into the spotlight by being an aid in improving one’s mental health through various methods.

Several neuro physicians are using virtual reality to diagnose and treat severe brain-related issues. VR therapy has been proven to reduce anxiety levels in patients. Virtual reality is also used to provide relaxation for the patients to help calm their agitation. The usage of VR has also resulted in positive impacts among many users.

Apart from stabilising mental well-being, VR is also notably used in many fields that improve a person’s physical well-being. With exciting technology such as VR, it takes the act of physical activity to the next level. Exciting guidelines and usage of scenic locations have positively increased the joy of working out. For more than twenty years, AR and VR have been constantly subjected to psychological research and inventions. By using VR, engaging more with physical activity has also proved to provide a sound mind.

Constant usage of virtual reality in therapy has given its patients a progressive increase in their optimism level. People who quoted behavioural changes after the usage of VR often term them as positive changes. Hence, creating a reality out of virtuality has become a modern-day solution for problems that arise out of reality. VR has also been used to treat PTSD, which is also a better solution than regular practices.

There are emerging AR and VR companies in India that give out VR content in terms of treating mental health disorders. The adaptation of virtual reality has opened the window to try many new treatments and therapeutic methods. Phobias are also notable problems for those who suffer from mental illness. Virtual reality has also helped in creating a situation where a person could combat their phobias. The usage of virtual reality in various games has also resulted in a change in people’s mindset to be more optimistic and happy. VR has also been effectively used in reducing stress, the most common problem among many people. Virtual reality has also helped many people to break away from their shyness and fear of interacting with other people. Virtual reality’s impact on a person’s well-being is massive, and it can be considered a technological blessing as it aids the well-being of many people across the globe. As virtual reality has always been a user-friendly technology, it can be noted as an excellent solution for maintaining a person’s Well-being.

Virtual reality headsets: everything you need to know

What are NFTs & Virtual Reality

VR Surgery: Virtual Reality Gets Real In the Operating Room

VR’s Role in the Marketing Strategies of Retail Shopping