What is the difference between AR, VR and MR? 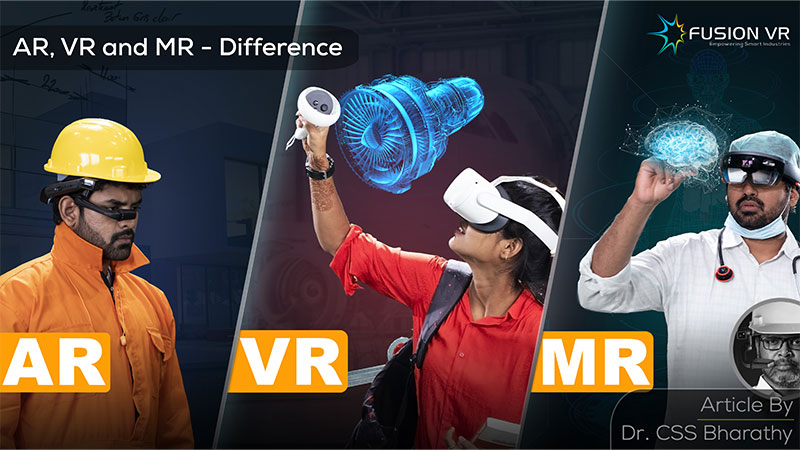 The title question is undoubtedly one of the most common questions from both novices and experienced users on immersive technologies. But why? The Reality of these technologies is that they are developing quite rapidly and the once solid lines between them are sometimes getting blurred. Tech giants such as Meta and Microsoft have invested billions in becoming the frontrunners in this area. There is also some degree of confusion that the industry itself generates and propagates with the use of interchangeable terms, particularly between MR and AR. And this quite naturally confuses the tech community and the general public. To add some spice to this mix is also the fact that some devices appear to be the same, and it takes an experienced person to distinguish them apart based on the manufacturer of those devices. Hopefully, I haven’t added to the confusion. Fear not, as I will make this simple enough on the difference between VR, AR and MR.

Virtual-Reality (VR) is a digitally created environment that completely disconnects the individual from his or her surrounding physical or real environment. To experience VR, we need to use a head-mounted device that also covers the eyes completely. This enclosure enables the user to experience a totally different sort of environment. The cool thing is that the user not only sees but also feels different in the virtual world seen through his/her VR headset.

This is the immersive nature of VR and quite truly the magical aspect of it that has unlimited potential for human benefit and enjoyment. The user not only experiences this virtual Reality but is able to navigate, engage in tasks, work and play using gestures, voice commands and a pair of hand controllers. These controls can also teleport the user to any place in the VR environment, view with a 360-degree view and enjoy all six degrees of freedom. For one thing, VR doesn’t allow you to move freely in the physical world as your vision is blocked. Therefore, it is necessary that VR is restricted to indoor use to ensure user safety.

Augmented-Reality (AR), as the name suggests, uses a digital overlay on tablets, smartphones or wearables such as goggles to augment or enhance the Reality in front of the user. A connection is established with the real world surrounding us through the lens of the device’s camera. This hybrid Reality can be experienced using touch and voice commands. AR is not as immersive as VR. Its applications are quite versatile. Users of Pokemon go can instantly identify what AR is, but the technology is simple to understand, deploy and use. AR has found applications across many industries and professions and can be used both indoors and outdoors.

Mixed Reality (MR) can be considered the enhanced version of AR with much better immersion. MR overlays 2D and 3D infographics with three-dimensional depth and spatial understanding. Mixed Reality helps visualize and interact with the physical and digital elements using hand gestures and voice commands. This is made possible through the use of holographic see-through or pass-through wearable goggles. MR is relatively safer as the user clearly sees the physical world in front of them. Like AR, it can be used indoors and outdoors. However, the visual quality of graphics is degraded if the ambient lighting is quite bright.

All three technologies have exciting applications across various industries and domains. VR, AR and MR are technologies that elevate human capabilities and performance to meet the professional needs of the 21st century. It enables us to visualize like never before and extend human understanding and innovation into newer and bolder areas of human endeavour.

I hope you are quite clear about these technologies and how they are different from one another. I encourage and highly recommend the reader to explore the Fusion VR website to explore it and broaden their knowledge using resources such as the Knowledge Hub and FAQs. Even as these technologies grow and trends change, the understanding gained here will surely help everyone undertake the exciting journey through the world of VR, AR and MR technologies.

Augmented Reality In Education | How will AR change education?

What should Designers learn to adapt for VR in Product Design?

VR Courses: Where do you Begin to Learn Virtual Reality?