Virtual Reality in Defence: How VR Is Changing Military Training? 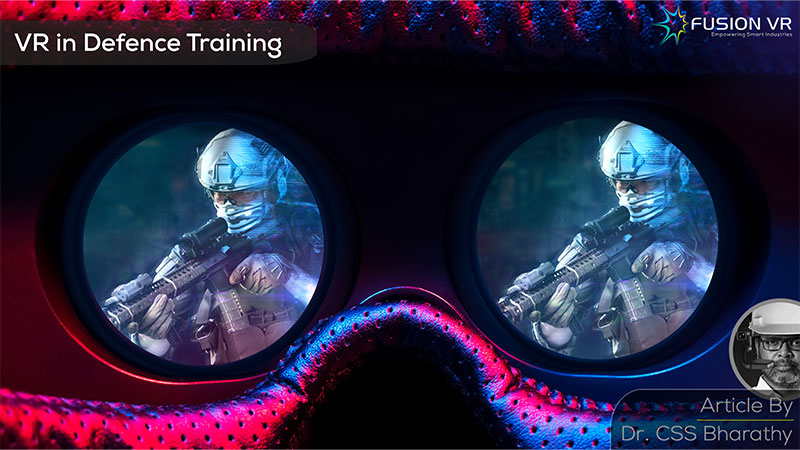 Implementing VR in military training improves training and sharpens the soldiers’ skills. Fusion VR is one of the leading companies in India that provides industrial AR VR & MR solutions for companies across the globe.

By failing to prepare, you are preparing to fail, said Benjamin Franklin, one of the founding fathers of the United States. He always had a witty and simple style to convey important ideas. Ask any general, and they will admit that every battle needs a detailed plan and extensive preparations.

Stepping into combat operations without all that planning and preparation is a trainwreck waiting to happen. A bloody loss will definitely happen to that regiment or unit. Training combat and support personnel in the armed services is of paramount importance and can never be underestimated. A well-trained, disciplined and motivating force is essential to taste victory on the battlefield.

The armed forces of every country have become very modern these days, and their strategic and tactical strengths have been enhanced with the deployment of sophisticated technologies. Training everyone on these technologies has become absolutely essential for total effectiveness as a fighting force. Conventional training approaches have multiple challenges, and new technologies have arrived on the scene to augment overall training needs.

Across the globe, virtual reality has become recognised as one of the most exciting technologies that help enhance human capabilities and elevate performance. PWC has reported that VR learners are 4 times faster to train than in typical classrooms and 275% more confident in applying their skills. The almost three-fold increase in confidence is a fantastic finding, particularly when individuals are faced with making critical decisions.

Today’s young generation is no stranger to virtual reality, with many having experienced it somewhere or at least learned about it from their friends or peers. This is something that the military establishment is recognising and taking initiatives to integrate virtual reality in military training programs.

VR training will be particularly effective in the training of new recruits and cadets. This type of training needs to be integrated into the boot camp itself. Training on weapons and weapon systems, safe handling, maintenance, situational awareness, obtaining practice and gaining competency in every skill is possible with VR at a minimal cost.

These virtual reality scenarios are also called Synthetic Training Environments and help in the creation of several bloodless battle scenarios for the young soldier. They are exposed to different terrains and simulated weather conditions with tactical and logistical challenges that they could possibly encounter in real combat situations. Every military situation could be a life or death scenario, and only a highly trained and competent soldier can deliver the mission’s objectives when it really matters.

The world’s best-armed forces, such as the US Army, have already recognised this and are seriously exploring virtual reality in military applications. They are actively reaching out to defence technology companies to develop simulations and mission rehearsals for their troops.

They would also include creating combat environments and responses for chemical, biological, and cyber warfare scenarios. They have recognised that VR training saves the cost incurred in logistics and using live munitions in field training, and there are no restrictions on training time as VR training can be conducted 24 x 7.

The US Army has installed a VR training simulator called the Integrated Moving Target Simulator or the Stinger Training Dome. This simulator provides a 360-degree combat environment to train and upgrade the skills of soldiers who need to operate the army’s MANPADS or man-portable air defence systems.

These are portable surface-to-air missiles such as the US Stinger, Russian Verba, Chinese QW-4 etc., which are a serious threat to helicopters, UAVs, drones, low-flying aircraft etc. This training develops a better understanding of these MANPADs, enhancing the soldier’s expertise and confidence to perform the necessary combat actions in the real theatre of war. The Indian military establishment is not far behind and has deployed VR flight simulators for pilot training at aviation facilities in Goa and Bangalore using solutions developed by private military technology contractors.

The military is often called to help in several non-military situations such as climate emergencies and pandemics. These are often called for at short notice as civilian establishments struggle to manage them. Training on such scenarios for all army personnel on emergency and disaster management can be developed using virtual reality. The skills gained will make a huge impact in saving lives and limiting property damage during national emergencies.

In summary, with today’s ever-evolving and complex geopolitical situations, armies recognise the need to be prepared at all times to respond to the security challenges of a nation. Anticipating enemy challenges and staying ahead of the competition can be overemphasised. Preparedness is developed through intense training and periodic review of competencies and capabilities.

Technologies such as VR play a major role in achieving those goals. Effective use cases need to be identified and solutions developed for quick deployment. The bottom line is that technology companies and VR solution providers need to actively work with the military’s leaders and help achieve such technological capabilities.

The Future of Augmented and Virtual Reality in Museums

How to Choose the Right AR VR and MR Solution Provider for Your Business?